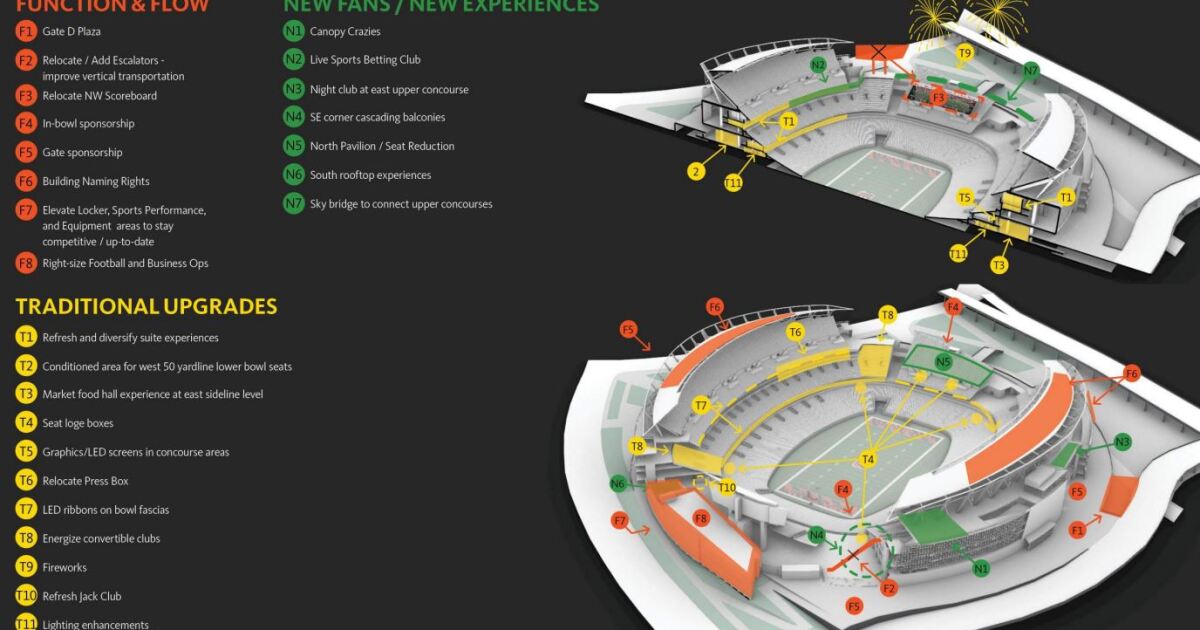 Based on feedback, goals and visits from several other NFL stadiums, Hamilton County and Gensler Sports drafted a plan filled with ideas on how to resolve issues and enhance the fan experience within Paul Brown Stadium. This is a layout where some upgrades will go.Gensler Sports

With the goal of creating new experiences for fans, renovations could include new cascading balconies, a live sports betting club, rooftop experiences and a nightclub on the Eastern Upper Concourse. Further detailed renderings for many of these ideas have not yet been provided.Gensler Sports

The Paul Brown Stadium proposal would attempt to move the scoreboard and expand it from 130 feet by 36 feet to 150 feet by 42 feet. Behind the scoreboard, a new pavilion area for fans is proposed.Gensler Sports

The multi-level pavilion will provide seating options with landscaping and access to different levels of club seating. It will also sit atop the Bengals Pro-Shop, with access to the shop below from the pavilion.Gensler Sports

Located above the Team Store, a new north pavilion shows options for access from the club level to the suites. The pavilion will be located behind the scoreboard, with bridges connecting several volumes to the multi-level pavilion.Gensler Sports

The plans propose to build cascading balconies on the southeast corner. Those balconies will cater to ticketholders of different levels, from suite to club level. A similar design is in effect at Camden Yards in Baltimore.Gensler Sports

A view of the proposed cascading balconies, once the scoreboard is moved to the newly proposed location.Gensler Sports

A look at how ticketholders will be able to access different levels of the proposed cascading balcony area.Gensler Sports

Traditional upgrades have been proposed, including diverse seating options to offer different ways of watching the game, a new market-style food hall experience modeled after Findlay Market, and a refreshing mix of other facilities throughout the stadium. .Gensler Sports

The current proposal calls for the division of regions into “districts,” all of which best represent Cincinnati. The proposed districts would be “Urban Wilderness,” “Bourbon Trail,” “Inline Railway,” “Culture and the Arts,” “German Heritage,” and “Findlay Market.” Only the “Findlay Market” district concept was shown in more depth in this proposal.Gensler Sports

The proposed Findlay Market District would re-imagine concession areas based on Cincinnati’s historic open-air marketplace. There will be a market food hall experience on the eastern edge of the district.Gensler Sports

The current plan for the Findlay Market district will expand concessions to accelerate service and reduce congestion and provide nearly double the existing points of sale.Gensler Sports

The plan currently proposes to diversify seating options, so fans have many different ways to join in and watch the game in addition to normal, club and suite seating. The offer includes space for a standing deck, drink rail and log box, in addition to expanding suite options.Gensler Sports

Potential log seating options can range from more traditional club chairs to designs for tavern-style seating and more. Based on the current proposal, it is unclear which of these designs is preferred for Paul Brown Stadium or if all are still under consideration.Gensler Sports

A major goal of the renovation is to reduce congestion and increase work and flow. Improvements are planned including relocating the main scoreboard, relocating and adding escalators and improving overall vertical transport. Ideas also include increasing sponsorship opportunities.Gensler Sports

In an effort to improve function and traffic flow within the stadium, the current plan proposes to replace the two existing ramps with escalators and add additional escalators.Gensler Sports

A major area of ​​traffic jam was identified as Gate D, where 45% of fans enter the stadium. Currently, people enter the stadium and the main ramp is overcrowded, with minimal traffic going to the other gates. To speed up some aspects of this experience, the current plan proposes implementing strategic landscaping and signage, while bringing in new security systems that will operate faster than metal detectors as people move across the line. .Gensler Sports

A reimagining of Gate D included relocating stairs and escalators and creating deliberate landscaping that would help distribute traffic flow and fans along all gates, rather than congregating at one specific gate. A permanent shadow structure is also proposed at the gates where long wait times may be unavoidable for some games.Gensler Sports

To increase vertical transport, more escalators can be added around the gates, especially in the southwest corners, to help fans reach their seating levels more efficiently.Gensler Sports